Come and learn from one of Australia's funniest story-tellers! The Rehearsal Room will host comedian and actor Luke McGregor as he helps us explore what makes us laugh, cry, and everything in between. 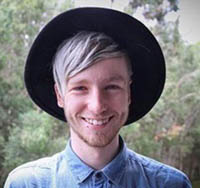 "Being able to identify and speak about everyday things we all experience in a comedic way makes for a highly entertaining show, because the audience knows exactly what the comedian is talking about. That's what makes Luke McGregor so side-splitting and hysterical."

1) Work with Luke McGregor on a comedy scene

You will be paired up with another actor and be given a scene to play with during the workshop.

Richard Sarell and Luke will have a chat about what makes Luke's comedy tick. There will be a chance for a few questions from the audience too.

Richard and Kyahl will both work with actors throughout the afternoon in conjunction with Luke.

Luke McGregor started his stand up comedy career in Tasmania in 2007 when he entered the raw comedy competition after one of the contestants didn’t show up. Since then he has gone from strength to strength, performing sold out seasons at international comedy festivals and developing critically acclaimed content for the ABC.

2017 saw Luke return to stand up with sell-out seasons of his brand new solo show "Almost Fixed It" in Adelaide, Brisbane, and Melbourne, as well as seeing Luke back writing/co-starring in Rosehaven.

Richard first discovered the core values of this acting technique when he was directing drama at the ABC in Melbourne in 1984.  Since then he has continued to explore and expand the understandings that evolved from these simple beginnings.  He has found these techniques produce high quality performances for drama as well as comedy.

﻿﻿﻿﻿Learn skills you will use throughout your career. Learn to be real, to be versatile, to be a great listener and to be skilled in ﻿auditions﻿.